An early Guide to the County of Norfolk describes the little village of Glandford in these words: "Nature could hardly stage a more delightful scene. Its church is a jewel set in a garden on the hill, looking over the wooded valley where the River Glaven flows to the sea. Below it is a rare little museum for all who love beautiful things... Now everything here is as beautiful as the skill of our time could make it."

All who have visited Glandford will agree that the above is a very fitting description of the village. The church is certainly very lovely and the museum is, in its way, as beautiful as the church. It is a small building with Dutch gables, and was built in 1915 by the late Sir Alfred Jodrell, Baronet, of Bayfield Hall, in a style to harmonise with the rest of the village. The work was carried out by workmen employed on the Bayfield Estate under the direction of Mr Thomas Holbrook, a churchwarden of the parish church. 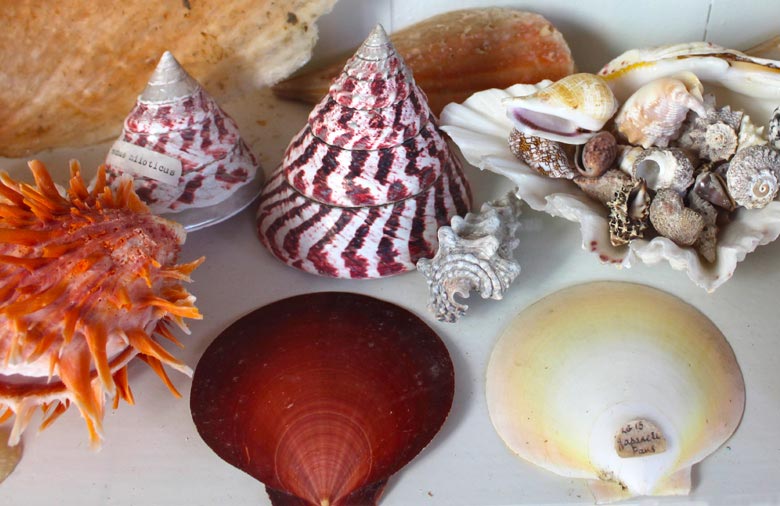 “The Shell Museum remains one of the few descendants of the cabinet of curiosities. Every object in this unique museum of natural and contrived curiosities suggests a story.”

The original purpose of the museum was to house a collection of shells made over a period of sixty years by the late Sir Alfred Jodrell himself and stored in boxes at Bayfield Hall until the museum was built. After completion, Sir Alfred and his sisters, Lady Seale, and Mrs Ind arranged the whole of the shells in their cases. These shells come from all corners of the earth, and the collection is constantly being added to. There are shells of every hue, shells as delicately coloured as butterfly wings; shells exquisitely carved.

But there are other exhibits besides the shells which form the main collection. There are lovely jewels, fragments of old pottery, a piece of Pompeii, a sugar bowl used by Queen Elizabeth I, some very fine specimens of agate ware, and a collection of items uncovered in the vicinity of Glandford including a very exceptional axehead. There is also an evocative tapestry executed by a local fisherman, John Craske, depicting the North Norfolk Coast. The Shell Museum remains one of the few descendants of the cabinet of curiosities. Every object in this unique museum of natural and contrived curiosities suggests a story. The most pleasing exhibits are those that stretch the shelly theme such as a tiny wooden barrel, no more than six centimetres high: "made from teak of HMS Warspite - a ship which was involved in the Battle of Trafalgar".

In fact, it would be difficult to describe fully the whole contents of the museum. A visit is essential to enjoy its unique flavour. 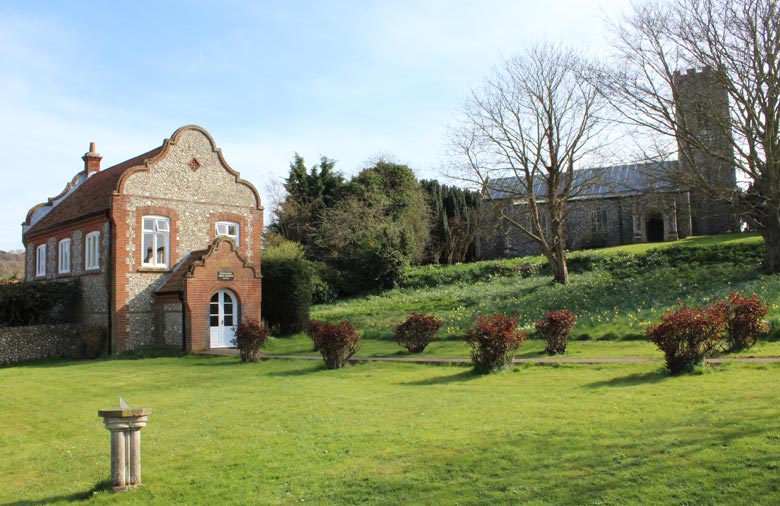 In the church tower is a carillon of twelve bells on which the clock strikes and on which hymn tunes are played at 6am, 9am, 12 noon, 3pm, 6pm and 9pm. A different tune is played each day.

Bayfield Hall and its Estate, which encompasses much of the land in and around the village of Glandford, was inherited in 1882 by the late Sir Alfred Jodrell, Baronet of Bayfield Hall. Sir Alfred was a gentleman of great generosity who set about rebuilding the village. Although there was a village here at the time of the Domesday Survey (1086), in which it is called "Glanforda", with the exception of one farmhouse and a cottage, the present village of Glandford is entirely modern.

The rebuilding of Glandford church began on 17 October 1899 and was completed on 30 August 1906. The reconstruction was a careful restoration of the earlier building, which was mainly thirteenth century with a fifteenth-century arcade and north aisle. Apart from the arcade and some of the masonry in the walls of the nave, chancel and tower, the whole church is entirely new work. The church contains a variety of elaborate woodcarving, including a pew which was occupied by Sir Alfred Jodrell himself - at the end of the pew is a representation of a dog laying his sorrowful head on his master's coffin, a design copied from Landseer's famous picture, "The Shepherd's Chief Mourner".

One of the most beautiful features of the church is the stained glass which originated from the workshops of Kempe and Bryans, the best known stained glass studios in the nineteenth and early twentieth centuries. In the tower is a carillon of twelve bells on which the clock strikes and on which hymn tunes are played at 6am, 9am, 12 noon, 3pm, 6pm and 9pm. A different tune is played each day. Though the whole church was rebuilt and furnished at the sole expense of Sir Alfred Jodrell, by his especial request no monument was erected to his memory except his memorial card which hangs in a frame at the west end of the nave. He died on 15 March 1929, and lies buried at Letheringsett. At Sir Alfred's request a monument was erected just inside the vestry door commemorating all those who were actively engaged on the rebuilding of the church. 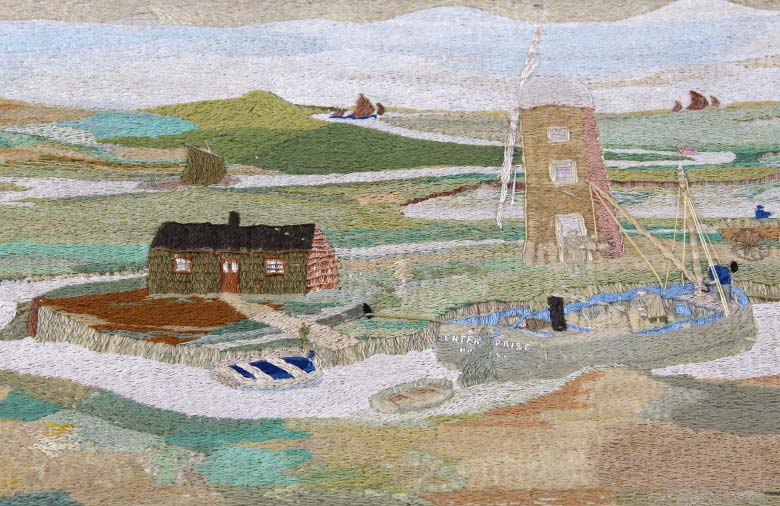 Detail from Panorama of the Norfolk Coast by John Craske

The museum features both a tapestry, Panorama of the Norfolk Coast, and a painting by local artist and fisherman John Craske (1881 - 1943). John Craske was born on 6 July 1881 at Lower Sheringham, Norfolk. As a young man he worked out of Grimsby as a fisherman, later living in Dereham when his parents opened a fishmonger's shop there. After he married Laura A.Eke on 22 July 1908 he lived in Swanton Morley and then in North Elham, where he endured a hard living selling fish to the surrounding villages using two ponies for transport.

On 9 March 1917 John was conscripted into the army. Just one month later, after a bout of influenza, John collapsed whilst on training. He was suffering from a brain abcess. With today's medical advances this would have easily been cured, but at that time it was sadly impossible. John finally came home on 31 October 1918 and spent the rest of his life at home with Laura, frequently in poor health, sometimes in deep unconsciousness, and often with weeks spent in bed. For health reasons during this period he lived for a while in Blakeney, Wiveton and Hemsby before moving back to Dereham. It was here that he took up model boat building, painting and needlework, using whatever materials came to hand.

In 1927 his work was 'discovered' by Ms Valentine Ackland who introduced his work to several influential friends. This eventually led to his work being exhibited in London and New York. Fortunately for us the main tapestry in one of the exhibitions did not sell at that time.

Together with the oil painting on the opposite wall, the tapestry was generously presented to this museum by the executors of John Craske's estate. Proudly The Shell Museum is now the only place in the UK where a John Craske tapestry is on show to the public - all the others are either on show in America or in private collections.